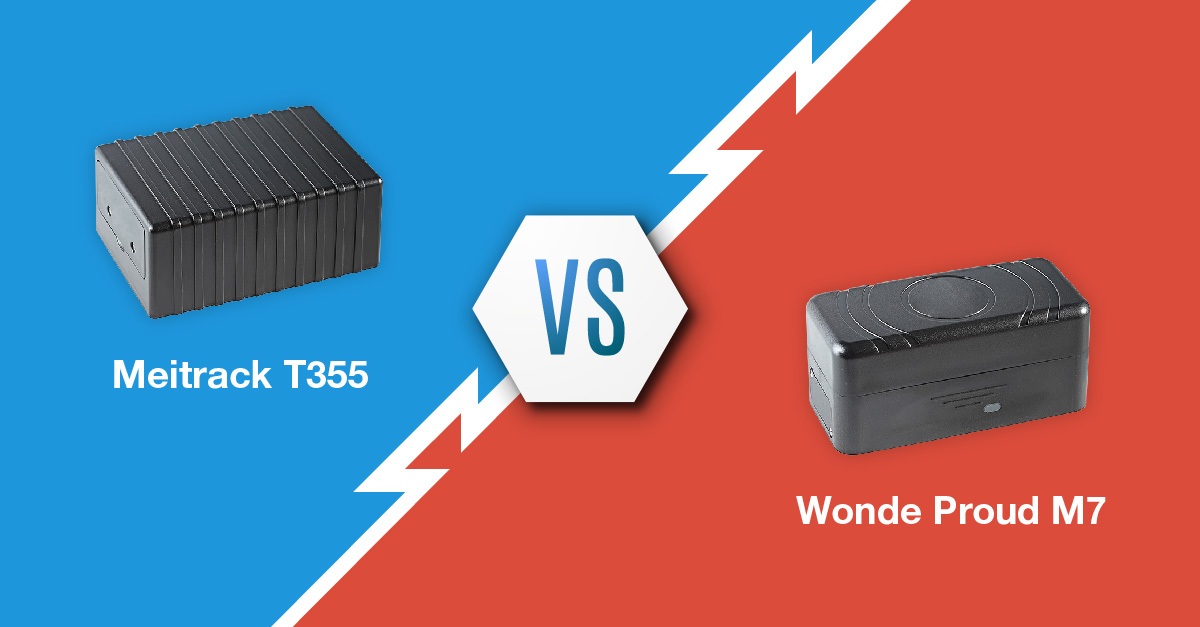 GPS trackers with magnet mounting became popular at the day they hit the vehicle and asset tracking market. Its business success was driven by a combination of simplicity and high-usability both for private and commercial usage.

Magnet mounting trackers are easy-to-use devices, that can be installed inside or outside a vehicle, trailer or cargo container. Usually these devices can work during many days and even months without recharging.

These wonderful features of GPS trackers with magnets open many possibilities of application. We take two typical and popular GPS devices Wonde Proud M7 and Meitrack T355 to get inside the secrets of such trackers.

When you take the devices, you feel that they are heavy, even though they look rather compact. A main heavyweight hardware elements are Li-Ion battery and neodymium magnets in the bottom part.

M7 has a robust housing made from high-quality rigid plastic. Its two parts are soldered together (waterproof class IP66) and tightened with bolts. At the bottom of the device there is a stainless steel with securely embedded magnets. If necessary, you can even remove these magnets, making the device easier from its 205 to 175 grams. Also at the bottom you may find a metal cover. With small screws this cover tightly hides the SIM-card slot and the device switch. Nearby there is a small button – detach sensor.

USB port, charger jack are situated on the side on the device behind a small cap on screws. However, it can be replaced by a cap sсrewed manually. In practice, this is a very convenient solution, because you do not have to look for a screwdriver to charge the tracker. By the way, it is charged by the power adapter which comes fitted with the device. Three-colored LED indicator speaks for its battery level and received GPS and GSM signals quality.

M7 may be easily re-branded: to place a logo on the top of the device and choose a color of plastic, in our case it is black. All in all, this GPS-tracker looks quite impressive, the materials are of very high quality.

T355 looks a bit more simple and wide: inside the tracker there is a high-capacity battery. One-piece housing hides even magnets. Such solution minimize the probability of humidity (stated waterproof class IP66), including user mistakes during the operational process. From the other side, it makes any repair impossible.

At the bottom you may discover a bulge under which is hidden a detach sensor. Also near by there is LED indicator.

USB port, charger jack, and the device ON/OFF switch can be found under the side cap of the device after undoing two screws. Thus, to be able and re-charge the device you need to have a cross-head screwdriver which is being supplied with the device. The presence of the switch at the same spot seems to be a big error and disadvantage. Any smart plotter will be able to switch off the device with no need to remove it from the object.

To compare the power of the magnet on both devices we took a digital scale and a 22-pound barbell weight. We mounted the T355 device to the plate and tried to lift it up. We were extremely surprised that the plate didn’t fall down but was lifted by the device. The huge plate was hanging as a constituent part of the tracker. After that we repeated this experiment with M7. The result was just the same, the plate didn’t fall down either, which sparked a big surprise again since M7 is smaller.

Though we had to choose a winner anyway. We took the digital scale, tied it to the trackers and measured the pull off force. After the test we came up with the following results. M7 may hold 11.7kg and T355 13.3kg. Taking into consideration the weight of devices itself, we may conclude that the M7 magnet may hold more than fifty-five M7 weights at a time, and T355 may hold thirty-five T355 weights.

Formally, M7 won (compared to its weight), but, it goes without saying, both devices have magnets of  phenomenal force. It is more than enough to stay mounted to the vehicle even under extreme driving conditions.

After all, we get the impression that designers from Wonde Proud worked to the max, thinking over all the aspects from usability to ability of OEM-customization. From the other side, T355 seems to be more suitable to all-weather using.

When this article was ready, we learned that Wonde Proud M7 is also available in M7 D2 modification – with a battery twice the capacity. However, we can’t call its design even controversial: it is rather bad.

Geolocation Technology: with GLONASS and LBS, but no A-GPS

GNSS-chipsets of both trackers are based on microcircuit of Swiss manufacturer uBlox – acknowledged leader in the production of semiconductors for tracking purposes. It means that the key features of GPS-devices (sensitivity, energy consumption) are very similar if not the same.

M7 and T355 are compatible with both GPS and GLONASS systems, which ensures monitoring in urban conditions and woodlands. Unfortunately, both devices lack the Assisted GPS technology which is aimed to shorten the time to first fix (TTFF).

Both GPS-trackers send CELL-ID data to software server, that allows to use LBS – technology of alternative geolocation. It is a backup method, which helps to define a location when satellite signals are not available (for example, in underground parking).

In a word, in the context of geolocation technology T-355 and M-7 have identical parameters which are the best for today. Therefore let’s take a look at the other features.

Both reviewed devices can make boast of its long lasting battery life which is possible due to several factors:

All these aspects in combination make M7 and T355 really multi-purpose. These devices can be used to control and monitor vehicles and assets on short and long trips. Though, each device has its own peculiar characteristics which make them different. Let’s take a look on the differences.

Up-to-date electronic filing provides both models with excellent Energy Index. We got the information from the manufacturers and tabulated the results:

The functional characteristics of M7 and T355 are comparable and quite alike, but tracking mode settings and sleep mode conditions differ greatly.

M7 firmware allows to assign two modes of operation: continuous mode and interval mode. In the first case the device works permanently, fix location of an object and frequently sends data to the server – even several times a minute. The frequency depends on settings and moving qualities. A user may set up the parameters of location update – by distance (meters), by time (seconds), by turns (degrees). It worth saying that if an asset doesn’t move for three minutes, the device goes to sleep mode. The time is impossible to change, you may only define the sleep mode: turn off only GPS, or both GPS and GSM modules. Movement status is determined by the digital accelerometer with five levels of sensitivity. 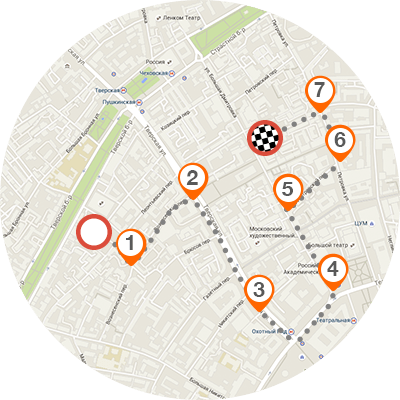 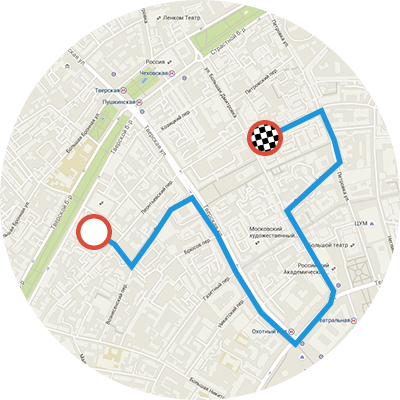 Interval mode is supposed to update location quite seldom: approximately once a day. A user may define the needed time ( from several minutes to several days) or specify up to three time marks HH:MM and location will be updated at indicated time every day. So, the device is sleeping throughout the whole time, main modules are switched off. To update data according a schedule, M7 “wakes up” for three minutes, receives satellite signals and sends it to software server. We wish, there was Assisted-GPS technology there!

Meitrack manufacturer endued T355 only with one tracking mode – continuous. It resembles the same of M7, but the sleep mode is quite different. When the device goes to basic sleep mode ( Only GPS module is turned off), it controls activity every 5 minutes, but if there are no events during 25 minutes, it goes to deep sleep mode.

Thus, T355 allows to control assets for several days in “step by step” mode. As for M7, it has additional interval mode to control objects which are in transit for many month. But you will see on the map not a track but separate marks received at the scheduled time.

Field testing: the quality of the tracks and operation time

To determine the actual operation time of the devices in practice, we conducted a great number of tests. For two months we used the devices in all the modes. We tested them in common urban conditions in summer, average temperature 20℃ (68 ℉).

To have visual proofs, we tracked GPS-devices using Navixy GPS-tracking software . By the way, we really liked the way they worked on this platform: devices support automatic activation ( so you don’t have to configure the trackers manually). Moreover, you may control tracking mode from the monitoring page using widgets. Specific hardware features are also supported (detach sensor, low battery, etc.). Take a look at the following screenshots to get acquainted with the devices tracks.

Based on test results we created the following table with operational time:

1 Without parking state;
2 T355 doesn’t support the interval mode;
3 After testing it could work up to two weeks more.

Of course we couldn’t keep the devices in continuous mode 24/7. Taking that into account we configured the deep sleeping mode so that devices consumed less energy while not moving. Nevertheless, we maintained experimental integrity. Frankly speaking, we were pleased and shocked at the same time because Meitrack T355 was able to function without recharging even though the difference in accumulator capacity is less than 1.5. Thanks to the efforts of Meitrack’s engineers you can use this new model for a longer time with the same capacity.

Meanwhile, the M7 device made an outstanding performance in the interval tracking mode, it showed amazing results. Taking them into account we can presuppose that in the 24-hours geolocation mode this model can function 12-15 months without recharging and if we put the interval of 1,5-2 days, the device can work for up to two years. Even if we make an adjustment for the winter temperatures, it is still quite impressive!

So, we were observing a battle of two hot opponents. And, first of all, they worth each other. But it’s time to sum it all up.

The magnets of both devices are excellent, their strength lick all creation. DIY Mounting is very handy and ultrareliable.

From the one side, Wonde Proud M7 is compact and better designed and , as a result, more handy to use. From the other side, Meitrack T355 with its one-piece housing seems to be better saved from humidity.

The devices have top level geolocation. The only drawback is the absence of A-GPS support, but we hope it will be added later in new firmwares. Flexible settings of tracking and sleeping modes let them successfully do their job – tracks are always accurate. Though, only M7 has interval mode for a long term work.

In conclusion, we would like to say that these two devices are perfect samples of GPS-trackers with magnets, we may even dare to say, that they are the best today. Buy without any doubts one or both of them.

If you are choosing between them, we may give you the following tips: for “step by step” control during a week or so, give your preference to Meitrack T355, because It works better in this mode. In case you need to track your objects from a couple of weeks to several month, opt for Wonde Proud M7 – It works up to two years in the interval mode.